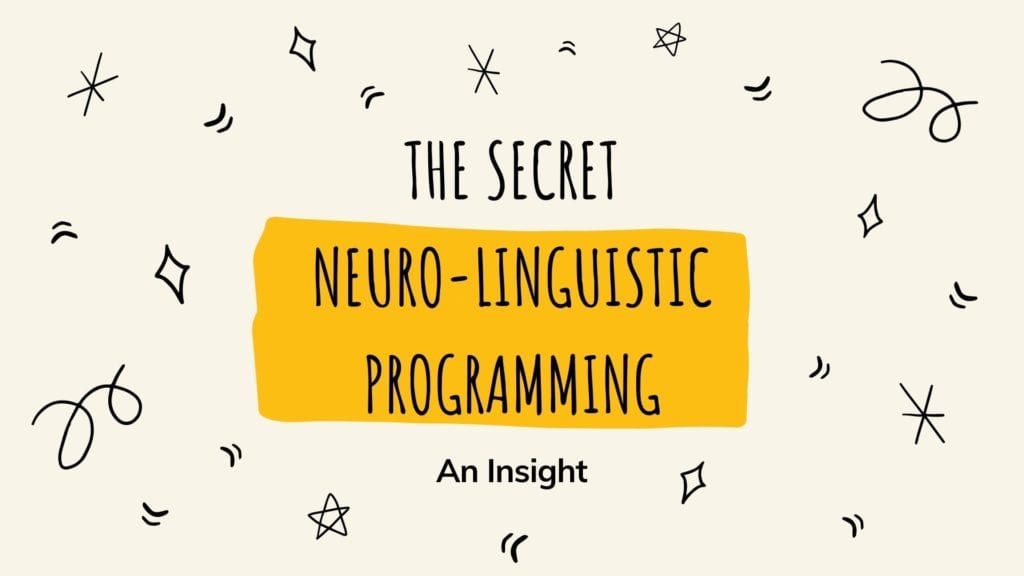 As I start speaking of what NLP is, chances are you would say… Yes, I know! Or I have read about it or someone would have told you about it. The NLP scenario in India has gone through a sea change, from very few trainers in 2010 to thousands of them now, it is good news as well as bad. Because there is so much noise that sometimes it is not easy to know what it is.…

So, what is NLP, really? Is it a set of those techniques you see on so many YouTube channels, is it a manipulative technique that some NLP baiters speak of and some people even go on to call it pseudo-science…What is it???

Let me illustrate by giving you a simple example, and I suggest you work with me on this. Imagine, you are walking on the street and suddenly you hear some commotion, you look in the direction and find people are indicating towards a big white thing (animal) rushing in your direction. Your mind goes in a frenzy and tells you it is a bull, no, it is a raging bull… what would be your response? Run, right?

Let us go behind the scenes and figure out how this response that might have saved your life happened. The first part of experience involved your sensory system, ears, eyes, and a whole lot of neural network that carries information back and forth to your brain (Neuro), Second part was your brain (mind) processing this information to comprehend the situation and interpret it using words (Raging Bull), it’s quite possible that you might have heard some words being spoken by the crowd itself like Run, Bull, etc. (Linguistics, we include non-verbal also in it) and finally, your response (unconscious in this case) to run and save yourself (Programming). Would your response be different if you were a trained bullfighter?

Now, we understand that NLP is Neuro-Linguistic Programming, or in simple words, it is a science that involves the study of your sensory experiences, your comprehension of the situation, and how you are programmed to respond (behave). The interesting part is that the three components we spoke of interact and influence each other, so the information moves both ways. Imagine, the way you are programmed will influence your sensory experience as well. No wonder you come across many people who would refuse to see some aspect of reality while for you it is right there for anyone (willing) to see.

There are thousands of ways to define and explain what NLP is, I have used one that I find simple to understand and another reason I promote this view is that it gives us an insight into what NLP could be used for. The example I gave is an extreme one, but, if you were to look at yourself or any other person and his/ her behavior, you will be able to understand it better using NLP.
Not only you can understand it better, but you can also influence and change the behavior, no wonder NLP is called Manipulative.

Classic NLP was initially developed as a therapeutic technique, the initial models were about therapies, and even participants used to be people from the domain of psychology, but over the period all of that has changed.

With time people realized its applicability in day-to-day life, in business coaching, sports coaching and you are bound to find it wherever you see, I have personally trained psychologists, teachers, trainers, sports personnel and coaches, business leaders, students, homemakers, Marketeers, professor of advertising, motivational speaker and even politicians… Today if you carefully observe any famous speaker, you will be able to identify many NLP language patterns as they speak. I am not saying that they all consciously use NLP, what I am saying is by learning NLP one could do all that as NLP is also called a meta-model for success.

I generally avoid jargon(s) in my programs, but, let me explain “Modelling” as it is a critical component of NLP and its structure. All of NLP is made of “Models”, you can visualize a model as a description of what contributes to making something work. If there is a great dancer, knowing how that person can perform is like creating a model of that person. Models, once created can be used for learning and teaching and that’s how most of the techniques in NLP have come by. People involved with NLP create models of people who succeed by carefully studying their behavior and thinking and cleaning out idiosyncrasies that do not affect the outcome. These are simplified codes for success and can enable learners to achieve their goals.

You may also look at NLP as a communication model, it is very efficient and as it is all about communication, you could use NLP wherever you need to communicate with others or even with yourself, this is precisely how I have been able to get results.

This article is a simple insight into what NLP is, I run programs ranging from one day to fifteen days on topics varying from core NLP concepts to parenting and leadership. That will possibly give you an idea about the potential of NLP and its usage.

It is like one’s curiosity to learn about water, it is everywhere, it is used by everyone and one could experience it. Yet one may spend a lifetime learning about its various states, properties, and usage.

From the article originally written for LifeWithin.in by Sushil Mehrotra

Difference Between Self-Improvement and Personality Development